History of the Fair

by Eileen and Jim Seaboldt 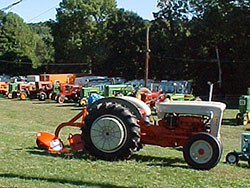 The Grange as we commonly know it, was officially organized in December 4, 1867 in Washington, D.C. It was the first organized movement of agriculture in the nation. It was founded by seven men, including Oliver Hudson Kelley, who realized that farmers needed help with social and educational concerns as well as agricultural matters. Oliver Hudson Kelley is recognized as the founder since it was his idea. The word “Grange” itself refers to a farm.

The Yorktown Grange was conferred under the direction of state Grange Deputy A.E. hall of Armenia, N.Y. in December 1898 after a meeting with several area farmers. As a result, the Yorktown Grange was organized on December 30, 1898 with 17 members. At the January 12, 1899 meeting seven additional members were received. Some of the names among the early members can be recognized today by roads within Yorktown’s highway system memorializing their contribution to society: Strang, Hill, Curry, Hyatt, Mead, Moseman, Lee and Kear.

Among the many projects undertaken during their beginning years were “The Westchester and Putnam Fire Relief Association”, which later became the State Grange Insurance Company and the “Cooperative Buying and Selling Program” which was started in 1903 and flourished into 1923 or later yielding up to 20% savings for farmers in the program.

By the year 1920, the Grange had grown enough to purchase its own building at the corner of Hanover Street and Railroad Avenue for $2400. After some repairs the first meeting in a Grange Hall was held April 1, 1920. This led to a second event, which was to have far reaching consequences, namely the “Grange Fair”.

It seems a series of debates occurred over who could grow the best vegetables. One of the members, Chester Hyatt suggested holding a fair to show off his fine potato crop and to see if other Grange members could match it. The first Grange Fair was held October 19, 1923 beginning a trend to present day. The early displays of produce, baking and flowers were auctioned off after being judged, creating a traditional finale to the fair.

As the popularity of the fair grew, the crowds became too large for the small Grange Hall. Starting in 1946, the fair was moved to the then “Yorktown School”, (now the Community and Cultural Center) in the middle of Yorktown Heights. The gymnasium was used for exhibits and tents were put up outside to accommodate livestock and the sale of commercial space.

Eventually, the original hall became a burden to maintain and discussions were held regarding a new meeting place. After serious study and debate, the decision was made to sell the original hall and purchase land and build a new hall. A piece of property consisting of about 14 acres was purchased on Moseman Road and the plans for a new hall were developed. The first meeting was held in the new hall in September 1954. The first fair was also held there in 1954. Three days of heavy rain made the new grounds knee deep in mud and the fair a financial failure; not exactly a good beginning. However, hopes were raised after receiving news that the previous fair, having been entered as a community service project with the State Grange, had placed first in the State and won a plaque and $200. Even better news was that on the National Grange level the Fair was awarded $500 and another plaque.

Maintenance of the large fair grounds became a major proposition and the Fair Association was formed to govern the fair. By-Laws were drawn in December 1954 and the first Fair Association met in February 24, 1955 allowing the Fair business and planning to be done outside Grange meetings. Even at that time the size and extent of the Fair was such that it took many months of planning and intensive hard work at Fair time.

As we look back over the many years the Grange and the Grange Fair have contributed to the community, we remember all the volunteers and Grange members who have made it possible. Most of the early members were farmers since farming was the primary occupation in the area. As time would have it, things change and farming is no longer as prominent in a suburban community.

The Yorktown Grange and Grange Fair continue despite changes and there is always more to do. The Fair still provides a showcase for the town’s people and surrounding areas to “show off” their goods, whether vegetables, flowers, needlework, baking, livestock or poultry. Due to the success of the fair over the years, we have returned donations to various community groups, as the intent of the Fair has never been to profit financially but to benefit the community. All fair revenue is used to maintain the building and grounds, to fund the next fair and to benefit community service organizations.